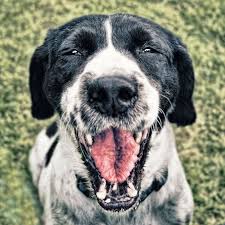 Are you reading your dog’s body signals correctly? You likely already know the obvious ones; a loose waggy tail normally means a happy pup, while a tail tucked tightly under the legs indicates a fearful dog. We think we know our pets best, but are there things we’re missing or interpreting incorrectly that could be resulting in serious miscommunication between us and our best boys and girls?

Often, body language is contextual. A growl may be borne from aggression but if it is during a regular tug of war it could be an indication that your dog is in a playful mood. There are many subtleties to keep an eye out for, to better indicate what type of mood your pup may be in. For example, when your dog averts his head but his eyes remain fixed on someone or something, you may see what is known as “whale eyes” (exposed whites of the eyes). This is an indication your dog feels frightened or threatened. He likely is trying to tell you he is uncomfortable and wanting to avoid further conflict. However, some dogs may show the whites of their eyes briefly when looking from one spot to another or due to the conformity of their eyes, so it’s important to take context into account and assess whether they seem agitated or if they seem relaxed and act from there if necessary.

Similarly, many people mistake panting as simply a sign of being too hot or yawning as just a sign of tiredness. While this is correct in some circumstances, many nervous or anxious dogs will display these behaviours too. These signs will often accompany others, such as lip licking, gaze avoidance and trembling. Rolling over onto their back is something many owners misread as Rover wanting a belly rub, when in fact he may be displaying submissive signals and wanting to be left alone. Again, it is up to you as a pet owner to read the context of the situation and assess whether something or someone may be causing your dog to become stressed or agitated.

On a lighter note, a good indicator of a happy and playful dog is the “play bow”. This is where your dog drops down onto his forelegs, butt facing upwards and tail wagging - similar to the position a cat might have when it’s stretching after a long nap. This may be accompanied by excited barking or short, leaping movements forward, almost as if they’re saying “come on, what are you waiting for!” In which case, what are you waiting for? Throw the ball already!